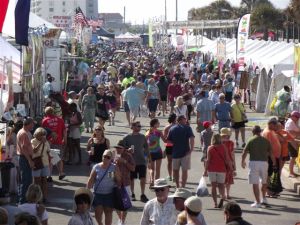 Music drifted down from the stage to the north, while the Gulf breeze carried competing scents of seafood and other delicacies up from the beach.

We were in between, under the canopy on the east side of Gulf Shores public beach on an October Friday.

The day started slow, but began to heat up after lunchtime. That is if continually plunging one’s hands into a frozen slurry of ice and water could be described as heating up.

Behind the scenes, helping to keep everything running for four decades, have been a corps of volunteers, local residents providing information, hauling ice to vendors, selling souvenirs, painting faces in the children’s area and taking care of any number of other tasks.

In the years that I’d covered or attended the festival, organizers have often mentioned how the work of the volunteers kept things running. This year, having some free time on my hands, I thought I’d check out the crustacean celebration from the other side of the booth.

I offered my services knowing that the organizers would take into account my long experience with and knowledge of the region, this festival in particular and celebrations around the area and decide on the responsibility for which I would be best suited.

I reported for my assignment at the east beer tent Friday morning.

The five members of the shift were issued their official volunteer T-shirts and received official instructions from Bruce and Terry, the crew captains.

In case anyone is wondering, the No. 1 rule in all this is that volunteers are not allowed to consume alcohol before or during their shift.

The two captains explained the procedures for taking money, issuing tickets and handing out the products, along with helpful tips, such as where to find a particular item rather than fishing around in a 158-gallon bin the size of four bathtubs, for the brand the customer requested.

Like many volunteers, most of us non-captains were new to the experience. I’d seen how hectic the crowds could become around the booths.

I had been a bartender once. I’d even worked in New Orleans, in the French Quarter, on New Year’s Eve. That had been a very long time ago, however, in college, but maybe I still had a bit of experience I could contribute.

I did also find that I could still open two beers while holding one in each hand. It’s good to be able to put the skills you learned in college to use.

I worried for a while that, with most of us never having done this before, things would end up getting jammed up in a pile of tickets, confused volunteers and customers.

It worked pretty well, however. The volunteers, Julie, Lynn, Barbara, Mark and I, found a routine. The cashier took the money, one person on each side pulled beers and handed them to another volunteer who opened the container and took the tickets.

This might be one reason for the success of the festival and other community events. People look for ways to help and work together to get things done.

The Shrimp Festival started as a small event organized by residents. The celebration has grown in the last 40 years, but I saw that somewhere in its heart, that spirit of community-minded cooperation is still there.

Guy Busby is a writer living in Silverhill. He can be reached at guylbusby@gmail.com and at guybusby.com. 